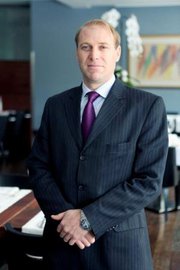 Mr. Foti has over 20 years’ experience of working in the hotel industry. With Hoteliers Inspiration founded in 2010, Sergio has been working for hotel properties in areas of training, coaching, product development and operational consulting projects several locations in Croatia, Ljubljana and Bled in Slovenia, Belgrade in Serbia and Portugal.

He is highly qualified and a passionate hotelier with extensive experience in developing and managing projects; a food and beverage expert, developed cooking workshops with award chefs around the world, achieving above market financial results and developing new and innovating concepts.

In addition to his day to day job responsibilities as a Director of Hoteliers Inspiration, he has also developed a  partnership with Hotel Schools and Hospitality Educational Centre in Slovenia and Croatia where we was on several occasions invited as a Keynote speaker for International conferences.

Sergio began his career in Buenos Aires, Argentina, where he completed his degree at the Hotel Management School in 1997. After working in Buenos Aires in 5 star hotels for IHG and the prestigious Claridge hotel, he then moved to London, England, where he continued to work for prestigious 4 and 5 star hotels for corporate brands, including Marriott and InterContinental.

During his time in London, he had the opportunity to work as Director overlooking the operation of Hotel and restaurant directed by celebrity chefs, he had been fully involved in the logistic and operation of gastronomical festivals and culinary promotions such as “Taste of London” and the launch of new restaurants and catering events in deluxe Hotel in Central London.

After a successful hotel management career in London, he decided to explore the Caribbean and Central America regions. It was here that he spent four years working as a Hotel Director of Operations in corporate and golf resort hotels in Panama and Trinidad and Tobago for InterContinental and Hilton brands.

Sergio believes that continuing education and personal development is essential, and therefore in 2007 he earned a postgraduate degree in Management Business from ADEN International Business School.

When speaking about his experiences and the effects strategy’s Hoteliers Inspiration use, Sergio says: “Our ‘Winning Ways’ approach and business foundation are the result of many years in the hospitality field; which I personally had the opportunity to live in, and learn from well-known corporate brand hotels from around the globe.